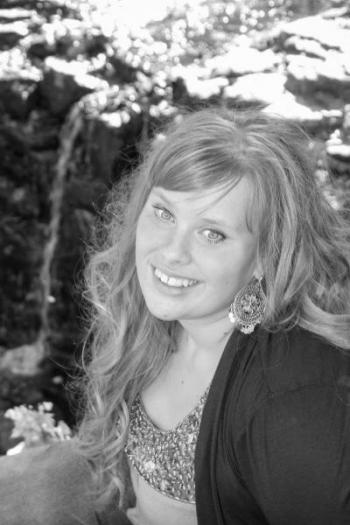 In Spring of 2017 the Board of Directors of the National Organization of Parents of Blind Children voted to start a fund in memory of Megan Bening daughter of Board Member Jean Bening and her  husband Allan Bening.  Megan passed away suddenly in January 2017 from a brain hemorrhage.

Megan was an avid braille reader who loved technology. Your donation to this fund will put technology within reach for blind children and teenagers.

To make a donation online use the button below.

At the 2022 National Federation of the Blind National Convention in New Orleans, the NOPBC will sell angel pins for $5.00. Your donation will support this exciting new program.

In 2013 Megan wrote a beauiful essay that won the

Megan’s first contact with the National Federation of the Blind was in 1999, through a slate pal.   A slate pal is like a pen pal but the letters go back and forth in braille.   Megan was in preschool and her TVI had seen a post about our NOPBC Slate Pals program—a father looking for a slate pal for his young daughter.

Soon Megan was writing Braille letters to Kyra Sweeney, her new slate pal.   The girls wrote back and forth for months and then exchanged phone numbers.   Once they had each other’s phone number, they preferred to talk on the phone rather than to write to each other.

At the end of June 2001, Kyra asked Megan if she was going to the National Federation of the Blind convention.   Megan had never heard of the NFB and asked Kyra what the convention was all about.   Megan then asked her mom if she could please go.   Allan and Jean, Megan’s parents, researched the convention and realized that it was only a week away.   There was no way they could make it work that year, but they promised they would attend in 2002.

Fast forward to July 2002.   Megan was 8 years old.   Kyra and Megan were very excited that they were finally going to get to meet each other in person.   Megan and her family arrived earlier in the day and Kyra’s family was not going to arrive until 11:00 pm.   Megan begged her parents to stay up late and go to the lobby so she could be there when Kyra arrived.   The girls had never exchanged pictures of each other or their families, so the Benings had no idea what Kyra or her family looked like.   As people would arrive in the lobby, Jean would describe the people to Megan.   Finally, there was a family that arrived that had a girl that looked to be about Megan’s age.   Megan and Jean went over to this family and Megan asked the girl if she was Kyra.   It was and the girls screamed and hugged in excitement.

Megan was thrilled to be among so many other blind people walking independently all over the hotel.   A couple of days into the convention Megan woke up one morning and announced that she wanted to go to the other tower and pick up breakfast for us and she wanted to go by herself.   The layout of the hotel was two towers with a skyway in between the two.   Megan’s parents asked if she was sure that she knew the way to the other tower and down to the first floor where the breakfast area was.   She said that she was pretty sure she knew the way and if she got lost she would just ask someone for directions.   Megan’s parents agreed to let her go. Unbeknownst to Megan, Jean snuck out the door after her camcorder in hand to videotape Megan’s mission.

Megan made it to the floor with the skyway and across the skyway but when she got to the other tower, she was not sure if she should go left or right.   Megan asked a person passing by “Excuse me, could you please tell me which way the elevators are?”   The gentleman asked where she was headed and when she said breakfast area, he said he was headed that way, too.   Jean followed them to the elevator and snuck in right after them.   The gentleman asked Megan her name and how old she was.   He then introduced himself—it was Dr. Fred Schroeder.   They chatted in the elevator and exited on the first floor.   Megan thanked Dr. Schroeder for helping her find the elevators.   Jean snuck over to Dr. Schroeder and told him she was Megan’s mother and was following Megan without her knowledge.

Megan made her breakfast purchase and started her way back to the room.   Jean snuck up the stairs and back into the room so Megan wouldn’t realize she was following her.   Megan entered the room very excited that she had accomplished her task!   She told her parents that a very nice man gave her directions at one point but that other than that she had found her way all by herself.   She was very excited at her newfound independence and didn’t find out what her sneaky mother had done until five years later.

Megan attended every convention with her parents from 2002 to 2013. After that, she attended on her own as a counselor for Blind Industries and Services of Maryland and the Colorado Center for the Blind.   In the summer of 2016, Megan was working on her internship for her Information Technology degree and was not able to attend the NFB convention.   Megan was involved with the NFB in her home state, too, serving as secretary of the Minnesota Association of Blind Students in 2016-2017.

One of the things Megan loved most about Convention was meeting up with all of her friends.   In fact, Megan made friends everywhere she went and stayed in touch with those she met at the Buddy program at Blind, Inc., the Earn and Learn program at Colorado Center for the Blind, and the Seeing Eye, where she received her first guide dog, Cori, in 2016.

It was not uncommon for Megan’s   friends to travel to Minnesota and stay with us.   There were reunions with Buddy Program friends and many Thanksgivings with an added guest, friends of Megan’s that were attending Blind Inc. and were unable to travel home for the holiday.   In December, two friends she had met at Seeing Eye, Lauren and Megahertz, came for a weeklong visit along with their guide dogs.   Because there were two Megans at Seeing Eye, our Megan became known as Megabyte and her friend Megahertz.   It was a little crazy having three giddy girls and three guide dogs in the house!

Megan loved to hang out with friends and loved to work with a blind friend and teach him technology and daily living skills.   Megan was adventurous and tried not to let anything stand in her way.   Her parents told her from the time she was young that she could do just about anything she wanted; they’d learn how to make adaptations.

Megan graduated from Minnesota State University in Mankato, Minnesota in December 2016 with a bachelor s degree in information technology and a minor in psychology.   She had decided to continue her education and was working towards her master’s degree in information technology.   She was employed as a User Experience Manager at Minnesota State University Mankato in their Bureau 507 department.   Megan had presented some of their projects to B302, a sister company in the Netherlands, and was scheduled to make a presentation in Spain in June 2017.   Her dream was to work for Apple or to be a white-hat hacker, working for large corporations to try to breach their own computer systems and then working with the corporation to fix the problems.

Sadly, unbelievably, Megan passed away on January 28, 2017, at the age of 22, from a spontaneous brain hemorrhage.    She had been in Rapid City, SD doing what she loved so much – downhill skiing.   Kyra, the young gal she started off being slate pals with, who stayed in touch, visited many times over the years, and reconnected every year at convention, surprised and honored Megan’s family by traveling from out of state to attend Megan’s funeral.  That friendship truly lasted a lifetime!

Many think that at age 22 you are just approaching the prime of your life.   In Megan’s case, the prime of her life happened all throughout her 22 years.   She traveled the country, skied, and even went sky diving.   She had a true zest for life.   She had no fear and let nothing stand in her way!   She is missed so much by her family, her many friends, and her guide dog Cori.-